We all make mistakes.  In 2003, I purchased a PT Cruiser.  It is completely reasonable for you to ask: “John, you don’t look mentally ill… why would you do this?!”.  The best case I can come up with is that I wanted a stick shift (pop quiz, hotshot, how many Lamborghini’s today are made stick?  Zero), I wanted something a little “different”, and I wanted it not to suck gas (remember this is in 2003, when average MPG was going down for the first time in 20 years).  But seriously, I have no defense.  The only thing working in my favor is that I corrected the mistake… a decade later.  I’m a slow learner.

The PT Cruiser is a Moving Pile of Garbage

No one know the issues with this car better than I.  Here is the list of what I had to put up with since buying it:

I’ve been stranded a dozen times by this car, and I wanted nothing more in the world than to send it to hell.  The most memorable time I’ve been screwed by the PT was driving back from the family cabin, a 4 hour drive from northern Wisconsin to west Minneapolis.  It was a Sunday, July 4th, and the tire blew out when I was miles from nowhere.  To make matters worse, I somehow manage to lock myself out of the car.  When it rains, it pours.  Or in this case, I’m sweating balls as I trek for miles to the nearest town.  I find a guy hanging around a marina who is a “locksmith”, which basically means he has a hangar he can bend in funny ways.  To his credit, my amazement, and another knock against Chryslers’ ability to provide theft-proof machines, he’s able to get the door open with his “tools”.  I give him $50 and he’s overjoyed.  Hey man, without you I’d still be trekking across the land of beer and cheese. 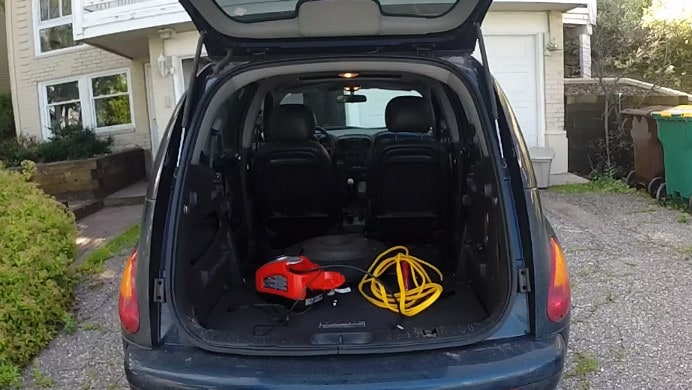 The Embarrassment of Owning a PT Cruiser

Actual quote from my wife while we were dating:

Let’s take my car.  I’d like to find you sexually attractive.

Her car was a Jetta (also stick shift).  Yes, my car was less manly than a Jetta, the quintessential aught’s girl conveyance.  We’ve been married for 5 years and together for 7, and she’s been in that car less than 10 times.  She wasn’t even in it when we drove it down to destroy it.  And she wasn’t the first woman to suggest driving her car, either.
Over the years, I’ve been laughed at while driving the car.  Literally, a car of women next to me at a stoplight would start laughing hysterically and pointing at me, just like in a movie.  I had a woman who was interested in me do a double-take upon seeing the car and had a very pointed question: “Are you gay?”.  Again, I have no defense.

Fast Forward to the Solution

I enjoyed a game at the time called World of Tanks, and did a Google search on if I could drive an actual real life WWII tank.  Turns out that there was a place just an hour south of me that did just that!  Plus, they had a package where you could smash cars with a tank.  What if I supplied the car?  Would that be possible?  Turns out that it was possible!
Before we continue, I did have a good experience sending this car to hell.  However, if you think that I’m pimping the place I did it with, let me tell you that they are woefully incompetent.  I spent 3 months emailing and on the phone with them, and each and every time I talked to someone new who had no clue what it was I wanted.  Even the day I showed up to deliver the car so they could prepare it for smashing, the guy I left the car with had no idea what was going on.
The day before we were going to smash it, they told me other legal things they needed that they couldn’t remember to tell me in the previous 3 months of emails and phone calls.  Seriously, they are morons and it’s miraculous that this thing got done.  Correction, they are morons with heavy weaponry.  Severely terrifying.  If you are going to do an event with them, use small words, write in crayon, and confirm everything 10 times over.
As part of the package, I got to drive other tanks as well and even shoot a couple of guns.  It’s a real redneck operation they have here.  And I mean that in a good way.

First we spend an hour listening to the tank company complain about how people come into their operation and claim they know everything about tanks because they’ve played Battlefield 1942 or World of Tanks.  Seriously, I agree with these guys: how they hell people claim they know about WWII equipment from video games is mind-boggling, and I enjoy every second of their griping.  It gets me a lot less upset over their incompetence to know they have to suffer armchair generals every day. 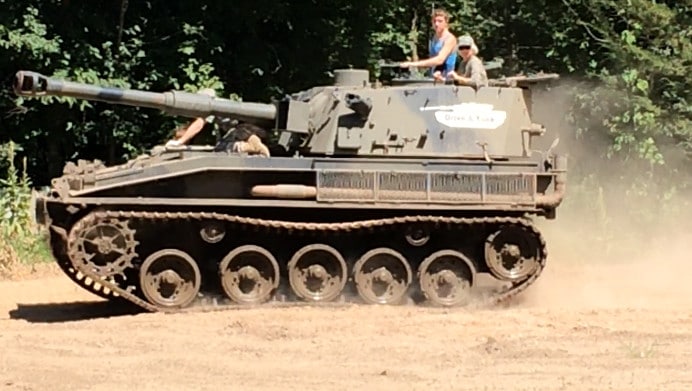 I am driving three vehicles today:

These are all British vehicles.  Why no American tanks?  Because the US chooses not to sell their military equipment to other countries/civilians.  It’s incredibly hard to get parts for American equipment because it’s so rare.  For example, to drive an M4 Sherman for 10 minutes will run you $3,500!  Tanks were actually meant to be disposable.  The average lifespan of a tank in combat in WWII was 42 minutes.  They were never meant to travel more than 400 miles in their life, and the odometer on some of these tanks is over 1,000 miles.  Just keeping them running is a big expense.
IT’S NOT ABOUT THE MONEY, IT’S ABOUT SENDING A MESSAGE
But I can’t really complain about how much it costs.  The tank package along with destroying a “working” vehicle will total more than a few thousand dollars out of my pocket.  Why didn’t I donate the car instead?  Simple: it’s garbage and on the verge of collapse.  It would take a few thousand dollars just to keep running.  I drove it once a week and my wife would make sure she was awake until I got home in case it stranded me yet again.  If I donated it, there’s a large chance they would have just sold it for scrap.  Might as well junk it myself.  It was a great catharsis.
This is actually one of the things that I didn’t expect: no one really understands why I did it.  Sure, some kids at the tank place [immediately upon seeing the PT sitting outside] exclaimed: “I want to crush the PT Cruiser with a tank!”.  So, I mean, the kids understood.  Everyone over the age of 12 seems to give me a confused look when I show them this.  The truth is that I just wanted to do something fun and unique.  It’s been a great story to tell and I’ve never once regretted doing it.

First, these vehicles were made with a shorter person in mind.  All of them expect a 5’8″ guy rather than someone over 6 foot.  So everything is a bit cramped.  I can’t imagine sitting in one for hours on end.  Second, they are HOT and LOUD.  You’re sitting right next to the engine.  It’s kind of like riding a motorcycle, where it’s possible to touch your leg on a piece of metal that will burn you.
Driving a tank is just like driving a forklift/skid-loader.  There are two levers: pushing the left one forward will turn the tank to the right, pushing the right one forward turns to the left, pushing both forward makes the tank go forward, etc.  All of the tanks are pretty responsive in their controls.


The visibility while driving “buttoned-up” is terrible.  There’s no peripheral vision and the driver is sitting off to one side of the tank, so much of it is educated guesswork.  The tank bounces up and down like a spastic child, and “comfort” is just not a word that comes to mind while driving any of these things.

Driving a tank is fun, but destroying a soul-killing, money-draining, cock-blocking conveyance is the real goal of this day.
Our tool for this task is the British-made Chieftain.  Clocking in at 62 tons, 35 feet long, and 12 feet wide, it seems capable for this job.  The tank is a decade newer than the previous versions I’ve driven, but the inside feels exactly the same.  It drives the same as well.
My instructions on how to do this are clear, and take all of a few seconds to be explained to me:

It might seem less than exciting after driving tanks off-road that there isn’t much interaction with the machine.  However, there are good reasons why they do it this way that will become clear shortly.


You may have figured it out already, but in case you haven’t: I’m not good with money.  What’s even more ridiculous than smashing a car with a tank?  Filming it from the air with a drone! 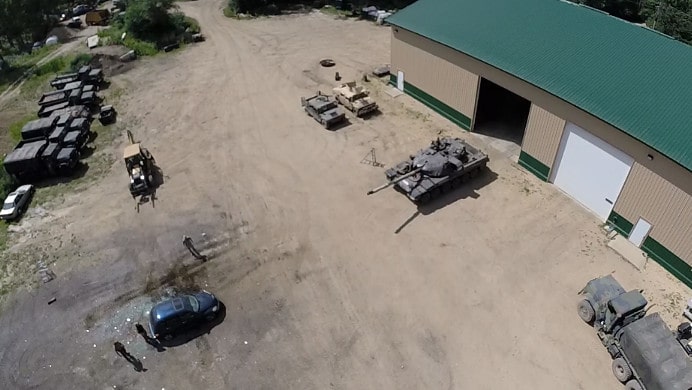 My brother-in-law Kelvin is at the controls of the drone.  If we were thinking, we’d have handed off our phones to someone to get the side-view footage as well.  Hey, back off!  This was my first time doing this!

Take a look at the GIF to to see it in action (video coming soon, promise).  Also in the video is another car crush with both the aerial and side views.
What was it like in the tank?  It seems stupid to say, but wasn’t completely obvious to me beforehand, but a 60 ton war machine doesn’t really give a fuck that the PT Cruiser is in the way.  While the tank pitches up a bit in the video, it was actually really hard to tell when I had actually driven over it.  Couldn’t feel a thing.

What happened next was very fitting for a car that would never work properly yet refused to outright die: it was caught in the treads of the tank and took 15 minutes for a forklift to pry it off. 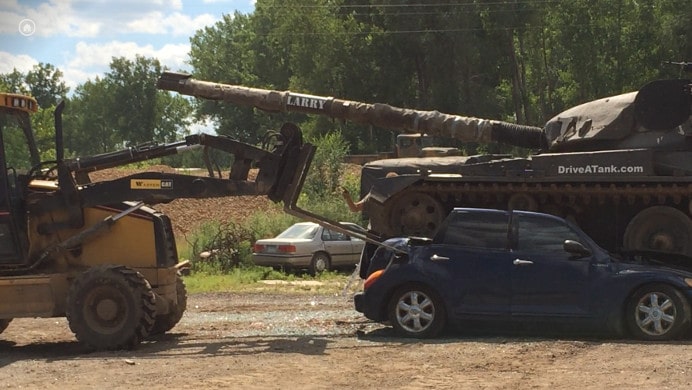 This happened with the other car as well, and is the reason why there are very strict driving instructions.  Traveling on rough terrain is one thing, and going over metal that wraps around into the tracks is a very different problem.  Eventually they manage to get the ugly carcass of the fail-machine off of the tank.
After the crush and random pictures of the wreckage, we’re pretty wiped out.  It has been a long and hot day.  The ride home in my wife’s BMW x5 is everything the PT was not: quiet, smooth, cool, and comfortable.  And the best part is that no one laughed at me or made judgments on my sexuality on the ride home.  Not owning a PT Cruiser is great.